Dealers
Fin-Finder How To Sight In Your Bowfishing Bow

Sighting in Your Bowfishing Bow

When bowfishing first started becoming popular, “sighting in” a bowfishing bow was unheard of. You just shot at a lot of fish for practice and hoped for the best. In this modern day and age, things have changed and technology has played a big role in making bowfishing easier. Maybe you’re new to the sport, or maybe your eyesight isn’t what it used to be and you’re looking for an easier way to consistently hit fish. Many people look at these lasers as a way to get kids and beginners into the world of bowfishing and get them on their first fish. Missing frequently can be discouraging.

Some old school bowfishers will scoff at the idea of bowfishing with a shooting aid, but it’s really a great idea to get someone hooked on the sport. This is where the bowfishing sights come in handy. Bowfishing sights are basically a laser sight that accommodates for the light refraction on the water. When bowfishing, you have to aim low to compensate for the refraction…with the laser sights, you don’t have to worry about aiming low. You can hold directly on the fish with laser and the arrow will hit where the laser is pointing. 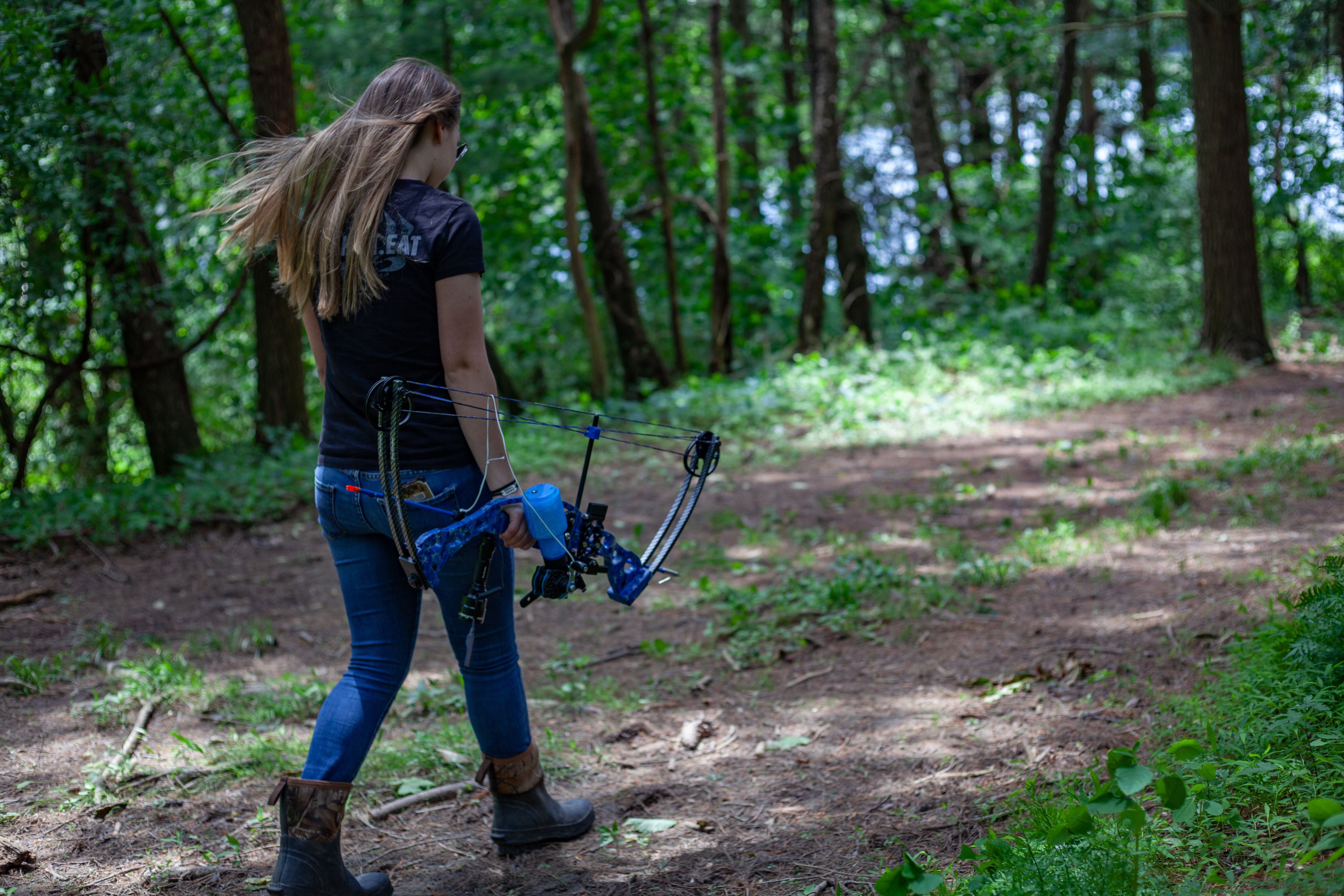 There are several different options of lasers from Fin-finder bowfishing to consider. Their bowfishing sights are not only easy to install but easy to use. They will fit both compound and recurve bows and can be mounted in multiple ways. One way is a stabilizer mount, the other way is to mount it where you would mount a normal bow sight which is more common. If this catches your interest, read on. The first step is to choose a sight that works for you and your bowfishing setup.

The Light Stryke Bowfishing Sight is the most economical sight. If you are on a budget, this one is for you! Although affordable, this sight is still well made with heavy duty aluminum construction. It mounts on the riser of your bow where a normal bow sight would go. The sealed touchpad makes it easy to switch on and off. 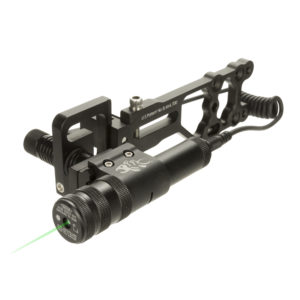 The second option from Fin-finder is the Light Stryke 2.0 Bowfishing Sight This one also mounts on the riser of the bow and features the same touchpad switch to turn it on and off. You do not need a tool to micro to adjust the windage and elevation once you’ve got it locked in, which means easy adjustments can be made while out on the water. Plus, this means that you can’t lose the adjustment tool. 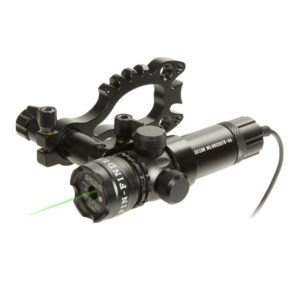 The third and final laser option available from Fin-finder bowfishing is the Refractr BLS laser sight. This one is much more versatile and includes hardware for mounting on the riser or as a stabilizer attachment. If you are shooting a bottle style reel, it’s nice to have the option to mount the laser on the stabilizer mount. This one is also made of aluminum with stainless steel hardware, making it extremely durable.

All three operate on batteries and are waterproof, just in case you accidentally drop your bow in the water or the fish makes some waves. All of the lasers work for both day and night shooting, which means it won’t need to be designated to a certain time of day.

Once you have made your choice and purchased a laser sight that works appropriately with your setup, the next option is to mount it to your bow and sight it in.

Mounting and Sighting in Your Bowfishing Sight

Mounting it is as simple as a few screws and you are set. You’ll want to make sure the screws are tightened securely so your laser can’t move, and it can’t accidentally work it’s way loose and fall into the water. Making sure it’s fastened securely also ensures the most accuracy when sighting in the laser.

Set up your bowfishing target fairly close to where you will be shooting from. You won’t need anything farther than 20 yards as most of your shots will be closer than that and fiberglass bowfishing arrows aren’t designed to take extremely far shots. Turn on your laser, and draw your bow. Point the laser where you want your arrow to go and release your arrow.

Chances are, you’re going to be quite a bit off.  Using your adjustment tool, adjust your laser a small amount and shoot again. Remember the rule of chasing your arrow when it comes to sighting in your laser. If you are shooting high, adjust the laser higher. If shooting to the left, adjust to the left. This can be a slow process to get it where you want it, but also fairly easy. Just take your time and make sure you get your arrow shooting where the laser is pointing. 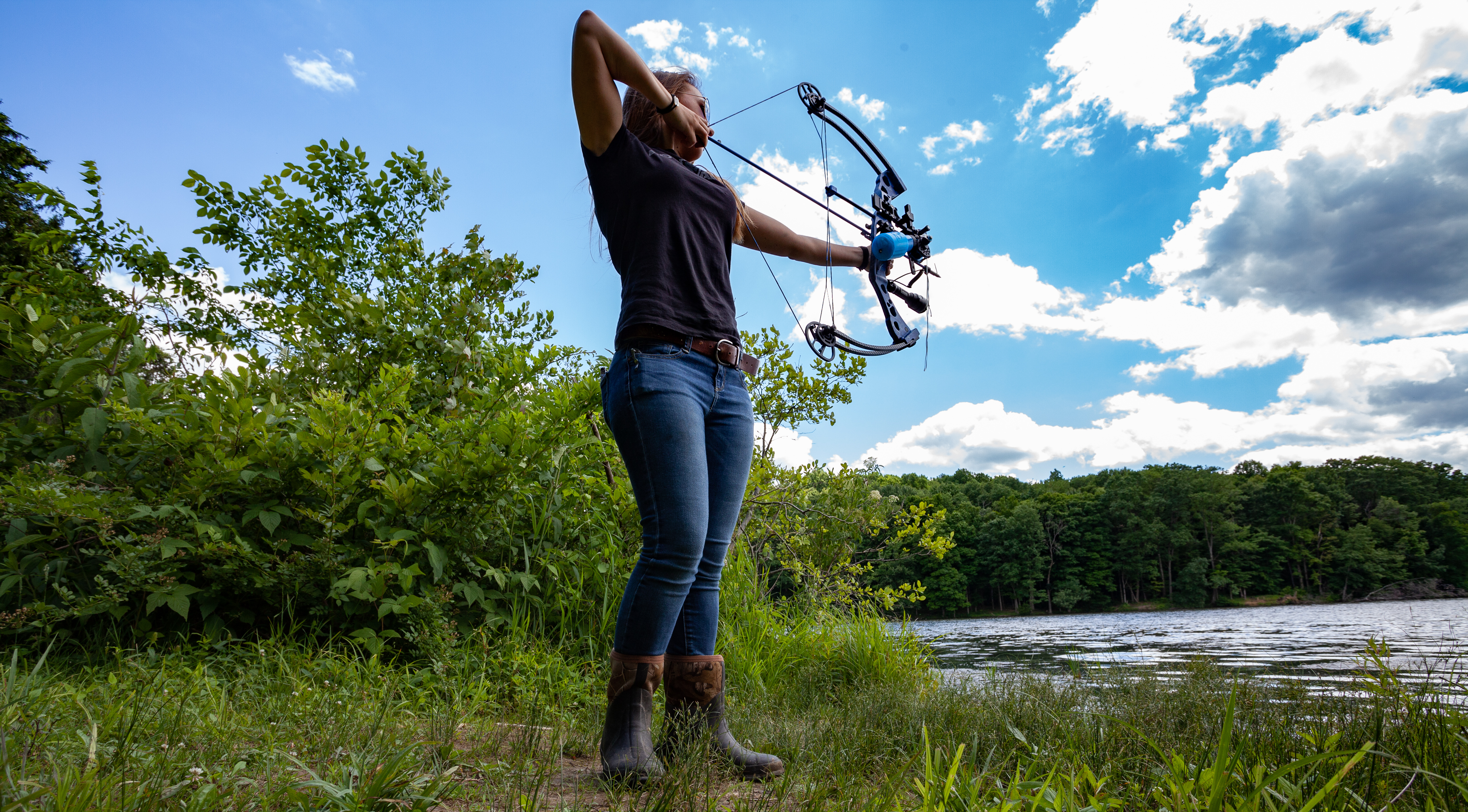 Once you get your laser shooting accurately, it’s always a good idea to try it out in some water to see how accurate it is, as it may be a little off. Plus, shooting in real bowfishing conditions is always more fun than shooting at a still target. Make sure that you bring your adjustment tool with you, although with the Light Stryke 2.0 you won’t need a tool to adjust it.

Shooting fish at different depths and different distances can make it a little more challenging, and although you can still miss using a bowfishing laser, you will miss less. Just like shooting with a normal bow sight, you will need to stay steady and concentrate on keeping the laser still while holding on the fish. The smaller the fish, the steadier you will need to be.

Like anything, practice leads to success! Get a bowfishing laser added to your setup and get out on the water!